Short summary of what was going on during last 3 months.

Due to the high demand of various modern distributions support and the major changes to code, I’ve decided to make a new intermediate NEXTSPACE release - 0.90. During the preparation to release I plan to finish these tasks:

Take care of yourself and prepare for new release!

I wrote news long time ago. If you think I’m out of business - no way! - I’m still here. I’ve finally put my hands onto GNUstep improvements that were waiting for good times.

Actually a bunch of good things have happend:

Most of the patches in Libraries/gnustep are gone and one patch was added: fixes pulldown menu display in NSPopupButton. This patch cannot be merged into GNUstep source tree for the simple reason: GNUstep tries to mimic the MacOS behavior which is not compatible to NEXTSTEP’s. Here are screenshots for the record of what my changes are (do you see the difference?):

As a result I’ve closed “Switch to the latest release of GNUstep” milestone. Although I need some time to check all the sharp edges which floats around due to use of HEAD GNUstep sources.

As you can see some improvements are fundamental, some - cosmetic. But all of this promises bright future to both GNUstep and NEXTSPACE projects.

P.S.: Do not hesitate to write some kind words to me! This is a fuel for open source developer’s engine (at least for me).

The summer has gone and it’s time for some news. I was quite busy with NEXTSPACE since 0.85 release during the summer time. I’ve created as ChangeLog file and periodically throw some info about progress there.

And last but not least NeXTSTEP compatible Help Panel! Just look at this: 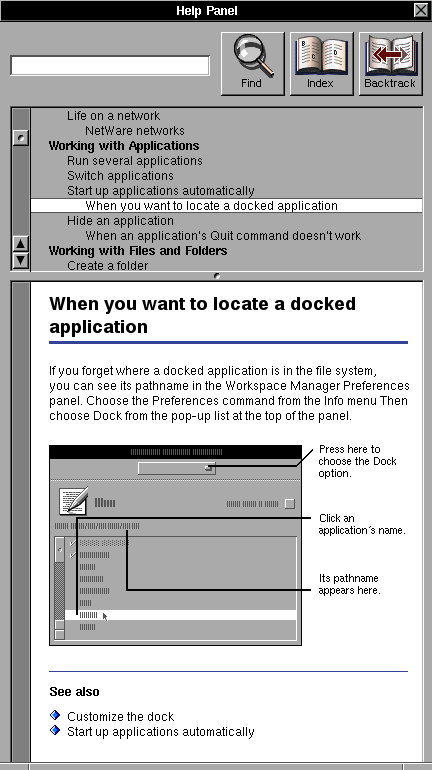 You see original documentation for Workspace Manager (uses RTF, RTFD and TIFF formats) I’ve copied from OPENSTEP for development purposes. For obvious reasons it cannot be used as is in NEXTSPACE. If you have good English and like NEXTSPACE idea I encourage you to write documentation.

NEXTSPACE 0.85 is out. This is the first release that one can use without compiling - everything can be installed as RPMs.

Almost 2 months have passed since previous news and a lot of things happend.

First, I’ve decided to bake a new intermediate release of NEXTSPACE - 0.85. The main idea behind this intention is to present bunch of changes against 0.8 version (including genuine frameworks and applications). Here they are:

Second, almost all my patches to GNUstep libraries went upstream. Although I’ve decided to base 0.85 release on quite outdated version of GNUstep GUI and Back libraries - 0.25.0 (current version is 0.27.0). This is due to the 2 reasons: 1. I sticked to the ART GUI backend. 2. 0.25.1 version intruduced regresssion in string drawing (NSStringDrawing now has rewritten cache handling which works weird with ART backend). I will return to master branch of GUI and Back after I’ll be happy with NEXTSPACE functionality implementation.

So, for the next several weeks I plan to create the 0.85 release. After that I’ll continue to close issues tagged to 1.0 release.

I’ve lost my writing permissions to GNUstep repository and pushing chages to GNUstep takes more time than I plan to spend. GNUstep art backend now marked as deprecated. IMHO cairo backend need more fixes to be considered as “production ready”. Despite of this, cairo backend looks promising and I’ll continue to make fixes and improvements to it. Meanwhile, current NEXTSPACE implementation will stick to art and outdated Base, GUI and Back.

Excercising with Linux audio subsystem I end up with SoundKit framework implementation :). It’s quite similiar to the NeXT’s one, however, due to asynchronous nature of PulseAudio it’s different in some places. This framework aimed to provide access to sound subsystem properties in quite simple fashion for both type of applications: mixer and player/recorder. I want it to have switchable backends (ALSA, PulseAudio, OSS). Here is a supposed code example:

The first task is to implement parts of SoundKit to have a working Mixer for sound properties adjustements: volume (common and application specific), mute, output/input port and profile selection. This task involves implementation of SoundServer, SoundDevice and SoundOut/SoundIn classes. The next task is implementation of stream classes for play/record.

For the testing purposes I created the Player application (very simple) with integrated Mixer.

More to come - stay tuned! Have a nice days!

Last month I’ve spent for exercises with Linux audio subsystems. Namely ALSA and PulseAudio. For that reason I’ve created a application Mixer inside Frameworks/Tests. There some results:

I need to finish PulseAudio code inside Mixer. Next is create NXSound implementation that can manage ALSA and PulseAudio with one set of methods.

Here are some screenshts of Mixer: 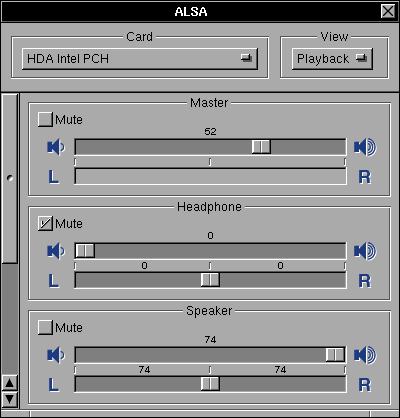 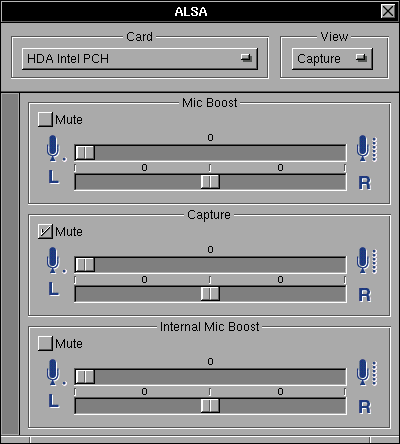 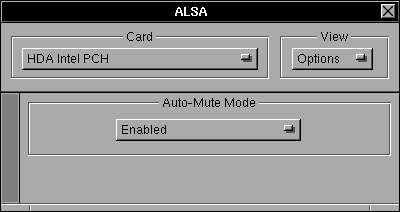 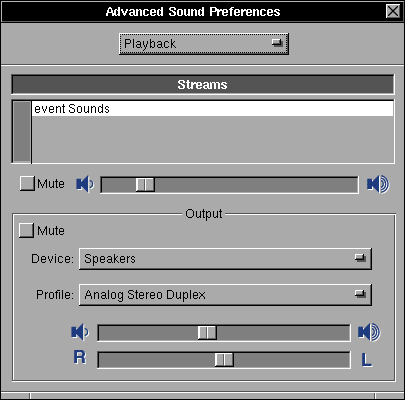 For the record - there are several methods of performing such operations:

Now I’m developing inside NEXTSPACE environment. I suppose that more bugs will be revealed. However I’m switching to other project tasks (Preferences, Terminal).

I’ve finished documenting some aspect of focus management. Although extensive testing, fixing and polishing are ahead. Because of frequent crashes and logouts/logins, I make development inside VM. Once I’ll be happy with focus management feature, I move to real hardware. That’s where I can deal with sound, power, networking.

Next: I need to document all changes and describe concepts of focus management related things.

Next: double-click on appicon should switch to workspace where app was opened.

Latest update to CentOS 7.6.1810 brings some big changes. What I noticed is: